Remember this crazy thing? Well it’s back! Now with rear metal flares covering the massive 335 Hoosier slicks out back and an extra little something in the power department, so keep reading… 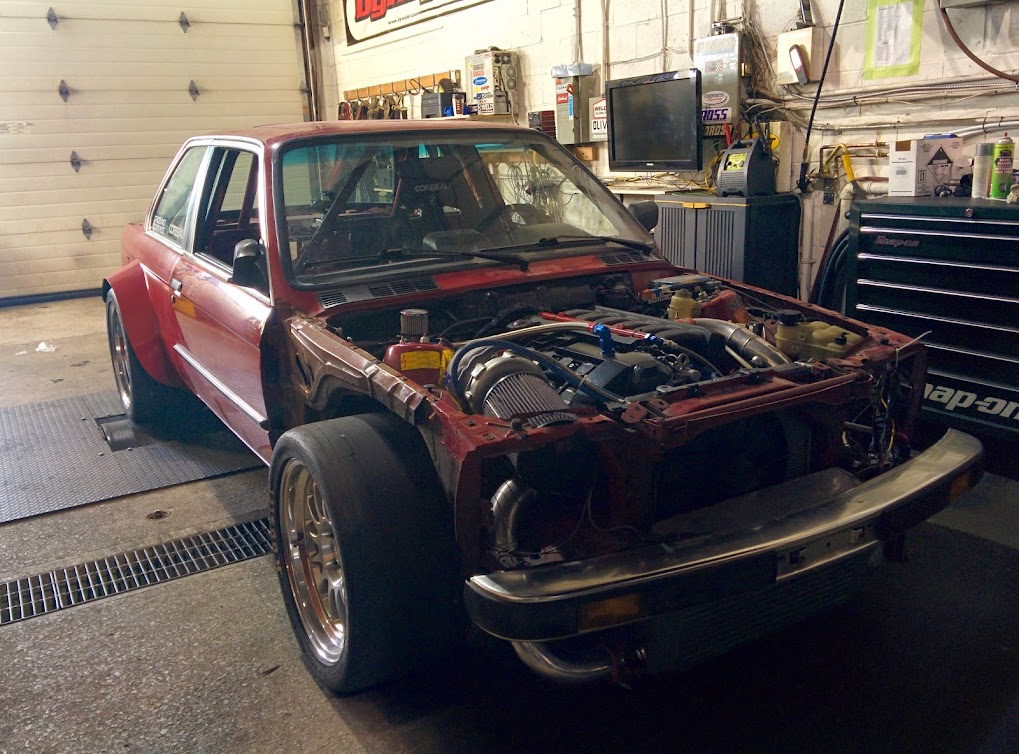 So as if previously making nearly 800 whp wasn’t enough, I had somehow convinced Dmitry to switch to cooler burning and turbo friendly E85 which by the way isn’t available here in Canada but it’s just damn awesome stuff and we’re awesome and find a way to make it happen. If you have a forced induction car and have access to E85, it’s probably one of the single best things you can do when it comes to performance.  Ethanol (alcohol) by nature burns cool, has an octane rating of ~105,  and with roughly 40% more fuel being injected at the same time there are some serious gains to be had in the power and spool department.

Previously we tuned this car to the ~770 mark on 110 octane race fuel…. Running at approximately 28 psi of boost from the GT4094R, and even at that point the power curve was fantastic seeing over 500 wtq @ 4350 RPM and rising quickly from there to a peak of 650 ft-lbs and holding over 600 until 6700 RPM giving this extremely light BMW and incredible power curve at practically any point in the engines speed range in any gear. Not too shabby right?

In comes E85 and as you can see above we instantly net some spool (~250 rpm) and while the boost ont he E85 run is actually 4-4.5 psi less then before we’re basically right there with the 110 octane tune.  Unfortunately we didn’t have a chance to play too much with timing or even turn on the PID boost controller in the VEMS because we has issues with the clutch slipping making it basically worthless once the motor tries to put the twisting force down to the rollers.

And while I didn’t have a chance to record this dyno session (because I totally forgot my video gear – my bad), there is a video of Dmitry himself taking his E30 out, on big ass slicks in the rain for it’s first ever maiden drive on this build.  Racelogic traction control was working over time here at pretty much any point he decided to squeeze the loud pedal and that folks he did get on video.